The workplace of tomorrow will need to respect privacy

The world of communications is evolving at a fast pace and those changes have a huge impact both in the private domain and in the working environment. We have always been aware of the necessity of privacy in our modern times, and have consequently built a communication platform that has privacy as a core value. We also often think about the workplace of tomorrow, as far as communications go. We observe, as most of you probably do, that the balance between work and private lif

Hi Waferians, Wafer Messenger has been featured on MSN Brazil and other relevant tech-specialized websites, such as Diario Do Grande and Tec Mundo, which shared with their readers the outcomes of an interesting survey conducted on Wafer Messenger users in Brazil and published on their respective websites’ homepage as a topic feature. Below you will find a complete the translation (Portuguese to English) for your enjoyment: “One of the things that annoys people the most, while

Wafer Messenger 1 year on the market: THANKS!

Hi Waferians, On 13th September 2017, we officially launched Wafer Messenger on the market. We have reached many important milestones in the course of this first year and we still have big news ahead of us. Ever since Wafer Messenger was just an idea in its early stages, our main concern has been to boost creativity and complete freedom in messaging for you, the users. We did not only want Wafer Messenger users to be target players, we wanted them to be the rulers of their o

“Moien” Waferians, We are proud to announce that we have been featured in a reportage broadcasted by RTL Luxembourg! The reportage is a spotlight on the most promising startups in Luxembourg, and we were over the moon at the thought of being selected for the feature. Some weeks ago our CEO Simone La Torre opened the doors of our Luxembourgish headquarters to the RTL troupe, and showed them what we are doing here at Wafer Messenger. It was a great pleasure to talk about our co

The blank canvas sends a very clear message to our brains: here you stand, without guidelines or restraints. Now it’s up to you. How will yo

Hi Waferians, We have been reviewed by TechTudo, one of the most popular and reputable tech websites in Brazil. Wafer Messenger scored 8.3 on a scale of 10 and got 10/10 for performance and functionality! The experts at TechTudo were particularly impressed by our Limitless Reach, as you can read in a quotation from the review here: “One of the main functions of Wafer Messenger is undoubtedly the possibility to send messages to friends without them needing to download the app

Enacting Change at the Speed of Sound: Wafer 1.4.7 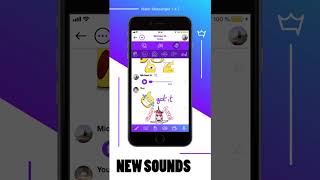 Why ask for privacy if your data is already in the burglars’ vault?

A few days ago, Facebook presented a new feature that will allow companies to reach out to their customers via the WhatsApp Business API. The declared purpose behind this new API is that of shortening the distance among businesses and people, making it possible to start a chat about the various offered services, or ask for information about previously made orders. At the same time though, it will pave the way for targeted promotions directly on your WhatsApp instance - whethe

Download another Messaging app; really?! Not another, but the last one.

What Halloween character are you?

Wafer Messenger featured on TechTudo - "How to use Wafer"

The workplace of tomorrow will need to respect privacy

6 Ways to Boost your Creativity

Wafer Messenger 1 year on the market: THANKS!

PRESS RELEASE: One year on the market. The journey towards global popularity - Wafer Messenger